Aeromonas veronii strain Hm21 was isolated from the medicinal leech Hirudo verbana and is used for genetic studies. We present here the 4.71-Mbp genome with a 56-kb plasmid and identify the mutations present in strains commonly used for genetic engineering.

Aeromonads are found in many aquatic environments and in pathogenic and beneficial associations with animals (1). One well-studied association is the digestive tract symbioses with leeches (2). Aeromonas veronii Hm21 was cultured from the digestive tract content of Hirudo verbana in 1996 by plating dilutions of the gut content on blood agar plates, incubating this overnight at 30°C, and maintaining it as a frozen stock culture (3). Antibiotic-resistant derivatives of this strain have been used in subsequent studies characterizing the molecular interactions between A. veronii and the host (4–6).
Previously, we published a genome based on Sanger sequencing, 454 pyrosequencing, and Illumina technology (7). This yielded a 4,684,957-bp genome comprising 75 contigs larger than 2 kb. We extracted the DNA using the MasterPure complete DNA and RNA purification kit (Epicentre, Madison, WI). For Illumina sequencing, NexteraXT libraries were prepared and sequenced on a MiSeq instrument (Illumina, San Diego, CA) (7). For PacBio sequencing, the unsheared DNA was used and the library prepared with the template kit 2.0 (PacBio, Menlo Park, CA), which was size selected using a BluePippin system (Sage Science, Beverly, MA). A single-molecule real-time (SMRT) cell was sequenced on the PacBio RS II platform using P5-C3 chemistry. A total of 60,113 reads with an N50 read length of 12,096 bp and a mean read score of 0.83 were assembled using the Hierarchical Genome Assembly Process (HGAP) 3 assembler with default parameters (8), yielding two contigs (4,710,355 bp [58.7% GC content] and 56,525 bp [59.7% GC content]) that were circularized manually. Using Illumina reads and default parameters, we used Trimmomatic for trimming the reads and adaptor trimming and breseq to polish the assemblies and detect mutations in the antibiotic-resistant derivatives (9, 10). The origin of replication was identified based on its proximity to dnaA, and the genome was rotated using Geneious R10 (Biomatters, Auckland, New Zealand). The genome was annotated using PGAP 4.12 for the NCBI submission (11). The closed genome contained 4,253 coding DNA sequences (CDS), 63 of which were on the plasmid, 10 complete rRNA operons, and 123 tRNAs.
The closed genome allowed us to examine repetitive features such as the rRNA operons. Five of the 10 16S rRNA genes were identical, but the others differed by up to 20 nucleotides. Such differences can lead to potentially misidentifying the species of Aeromonas (12). In this case, three out of seven sequences would have misidentified the species.
Several antibiotic-resistant derivatives of Hm21 that are used for genetic manipulations (3–6, 13) were analyzed. The genotypes of the rifampicin-resistant derivative, JG84, were rpoB S531F, a Δ21 deletion in an intragenic region at position 1648065, and nrdD K582N; the streptomycin-resistant derivative, JG1002, had the mutation rpsL K88R. Interestingly, JG304 (Hm21RS), a streptomycin-resistant derivative of JG84, lost the cryptic plasmid pHm21 while gaining rpsL K88R. 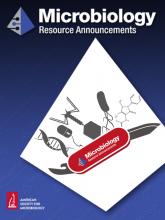 © 2020 Graf et al. This is an open-access article distributed under the terms of the Creative Commons Attribution 4.0 International license.